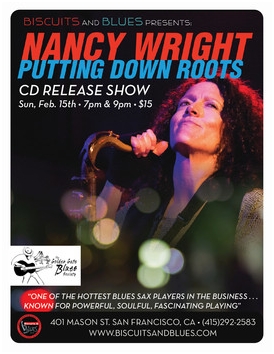 Nancy Wright has been a staple of the Bay Area music scene for decades, the Ohio-raised saxophonist winning over audiences and fellow artists alike with a saxophone sound that seamlessly blends blues, jazz and soul influences into a style all her own. Here’s a bit of a bio:

That resume and all it represents rings through loud and clear on Wright’s new album, “Putting Down Roots.” A CD release show sponsored by the Golden Gate Blues Society is set for February 15 at Biscuits and Blues in San Francisco. Here is the first half of my two-part interview with Wright.

Question: “Putting Down Roots” pulls off an impressive feat in that it evokes blues and soul traditions through all original compositions. Walk us through the writing process for this album.
Wright: I decided to challenge myself to do an all-original album, including (for the first time) songwriting. Once I had that intention, it was a bit like opening up a box and seeing what was inside. Inspiration came anytime – going for a long drive, brushing my teeth, warming up before a show. I would grab my phone and hum the melody or sing the lyrics into my Quickvoice app. I would later set aside time to review the ideas and work them up. Some tunes were written in whole cloth almost instantaneously, others came in pieces. Some were launched from a concept, others from a melody idea. Some were inspired by a favorite groove.

Question: How do you find the middle ground of working in the blues and soul traditions but avoiding clichés?
Wright: I think my love for and years playing these genres gave me the foundation. Not sure how I avoided clichés – I guess it’s just the way my brain works. As a sax player, I’m constantly creating melodies when I improvise. Also some aspects of improvisation are a bit like problem-solving and that type of musical problem-solving also seems to apply to songwriting as I develop an idea. As a horn player with marginal piano composing skills, the biggest challenge for me was trying to communicate the grooves I was hearing in my head to the rhythm section. I did Garage Band demos for some of the more challenging tunes with keyboardist Tony Lufrano. Sometimes it took a bit of trial and error before we were satisfied. 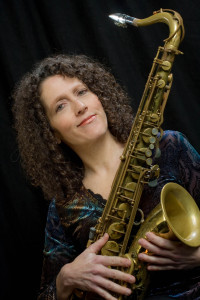 Here is the second half of my interview with veteran Bay Area saxophonist Nancy Wright. A CD release concert celebrating her new album, “Putting Down Roots,” sponsored by the Golden Gate Blues Society is set for February 15 at Biscuits and Blues in San Francisco.

Question: As a blues fan, I must ask about your experiences working with two of my favorites, Lonnie Mack and John Lee Hooker, both of whom are celebrated with tracks on the new album. How did you get involved with them and what, ultimately, do you think you learned personally and professional from each experience?
Wright: I met Lonnie when I lived in Dayton, Ohio. Lonnie invited me to sit in with him any time and I did as much as I could. I would politely start to leave the stage after two tunes and he would say, “Where you going, girl?” I remember many nights eating Corn Nuts one at a time to stay awake on the long drive home from Covington or Cincinnati after playing with Lonnie.
I think the pathway to becoming a better musician involves playing with people who are better than you, so the experience of playing with Lonnie and Dumpy Rice and the rest of the band at that point in my career was incredible. At the time, I was touring Ramada Inns with a local top-40 band and not too happy about it. Lonnie influenced me to leave that group and play blues. I might have stopped playing altogether had I not met Lonnie when I did. Lonnie’s singing and playing moves and inspires me so much – so soulful and intense. Lonnie’s music had a huge influence on my style and approach.

Question: And Hooker?
Wright: While in Dayton, I was a cocktail waitress at the big jazz/blues club, Gilly’s. The owner, Jerry Gillotti, would let me put down the cocktail tray on the last set and sit in with the bands. I sat in with John Lee one night and got hired. The tours were amazing and included shows at Carnegie Hall and the Delta Blues Festival. (At Carnegie, Ornette Coleman opened the door of my warm-up room to see who was playing.) For some dates, the Robert Cray band opened, followed by Willie Dixon and then John Lee headlined.
I was so young, it was just an amazing experience. I got very proficient in some of the guitar keys that can be challenging for tenor players, as much of the material was in E and B. John was a sweet, dear man. Through John’s bass player, Steve Ehrmann, I was later hired by a Bay Area New Orleans R&B band (Hot Links), which led to my move to the Bay Area in 1983 and my love for all things NOLA.

Question: Who will be with you on stage at the CD release show and what do they bring to your sound?
Wright: I will be backed by the powerhouse musicians from my recording. I have worked with these players over many years, most recently touring with all of them together in the U.S. and Europe with the Frank Bey and Anthony Paule Band. Paul Revelli’s drumming provides a rock-solid foundation; Paul also contributed to some of the arrangements. Paul Olguin is rhythmically solid and musical on bass. Anthony Paule’s unique guitar sound and approach rounds out grooves and provides deep, intense solos. Tony Lufrano delivers delightful surprises on the keyboard with his soulful, intelligent and tasty playing.