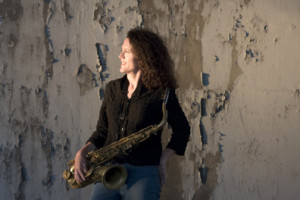 The history of jazz saxophonists who cut their teeth in blues and R&B bands is rich. The list includes Stanley Turrentine with Lowell Fulson, George Coleman with B.B. King (and, after leaving Miles Davis, Lloyd Price), Ornette Coleman with Pee Wee Crayton, David Sanborn with Paul Butterfield, and, of course, Hank Crawford and David Newman with Ray Charles. Unlike those horn men, Nancy Wright didn’t set out to play jazz. The Dayton, Ohio-born, San Francisco-based saxophonist was perfectly content lending her big tenor tones to blues bands, and over the past quarter century she played with some of the best. Her discography boasts recordings with Katie Webster, B. B. King, Elvin Bishop, and Joe Louis Walker, among others, and she’s been on the road with Webster, Bishop, Walker, Lonnie Mack, John Lee Hooker, Johnny Adams, Earl King, Commander Cody, Maria Muldaur, and Greg “Fingers” Taylor and the Ladyfingers Revue featuring Janiva Magnus and Debbie Davies.

Early in her career, before moving to California in 1984, Wright had been a fixture at Gilly’s, a jazz and blues club in Dayton. She was a member of The Slugs, a blues-rock band that packed the place during happy hour every Friday. She worked other nights as a cocktail waitress, with permission from owner Jerry Gillotti that she could put down her tray and pick up her horn when invited to sit in by visiting bands. She jammed with Steve Ray Vaughan one night, Hooker another. Hooker was so impressed by her muscular tenor attack that he took her on tour. One of their first engagements together was at Carnegie Hall.

“I was warming up in a broom closet, and Ornette Coleman opened the door to see who it was,” she recalls about the Carnegie concert.

Gigs at Oakland blues bars in the late ’90s with organist Jackie Ivory began wetting Wright’s appetite for jazz, particularly the warm sound a tenor saxophone and Hammond B-3 can make together. She later started playing standards in the quieter setting of a coffee house in her neighborhood in San Francisco’s Noe Valley with French guitarist Bruno Pelletier-Bacqauert.

“I realized that I love playing with organ players who have a lot of jazz in their playing, even though they have a lot of roots stuff,” Wright says of working with Ivory. “It opened up a whole new side of my playing, as has playing gigs without a microphone. My whole thing for years was learning how to cut over electric guitars. Now it’s this whole different paradigm. It’s like a whole ‘nother side of the horn that I get to fool with in a small acoustic setting. There’s a whole different dynamic range.”

Wright kept in touch with Jerry Gillotti, and when planning a visit home in 2003, she phoned ahead. He offered her a one-night gig and hired organist Tony Monaco and drummer Louis Tsamous to back her. Wright felt out of her league playing with Monaco, the baddest B-3 man in Ohio, standard-bearer of a Columbus organ tradition that dates to Hank Marr and Don Patterson.

“The experience for me was like all of a sudden I’m in a Ferrari and I don’t know how to drive it,” she explains. “That’s when I said, ‘OK, now I’ve gotta go back and get better at playing jazz more sensitively, so that if I ever play with this man again, I’ll have more to say and more to bring to the table.'”

Four years later, after plenty of woodshedding, Wright phoned Monaco and asked him to produce her debut recording as a jazz saxophonist. He agreed and, with guitarist Robert Kraut and drummer Tsamous (with whom Monaco regularly works when he’s not on the road with Pat Martino), provided empathetic support for Wright on four of her own compositions that are steeped in the soul-jazz tradition, a jazz waltz by Pelletier-Bacquaert, a Latin-tinged Monaco original, the jazz standards “Moanin'” and “Minority,” and the popular standards “You’d Be So Nice to Come Home To” and “When Sunny Gets Blue.” Much like her jazz tenor hero, Houston Person, Wright was well acquainted with the lyrics of the latter two songs before she recorded them.

“She’s a feisty, fiery woman,” Monaco says of Wright. “I find her enthusiasm most appealing, and it comes out through the expressions in her horn playing. She’s got the heart, and she’s got some nice soul coming out of her.”

Big-toned, melodic jazz tenor players don’t come down the pike much anymore. Nancy Wright may have taken her time getting there, but the arrival on the current jazz scene of such a commanding old-school stylist is an especially refreshing development.