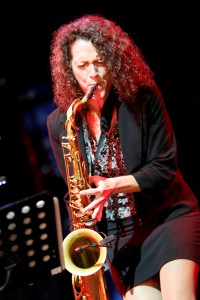 Dreaming up the challenges, and meeting them
By Paul Freeman
For The Daily News
February 12, 2015

Nancy Wright has been performing professionally since 1982, establishing herself as one of the Bay Area’s most dynamic saxophone players. Her musical gifts continue to blossom dramatically.

For her latest album, “Putting Down Roots,” Wright also emphasizes two of her other talents — singing and songwriting. On this project, she served as producer for the first time.

As for her potent sax playing on this set, Oakland-based Wright returns to her blues, R&B, New Orleans, funk and gospel origins.

“It’s the kind of music that’s really the foundation of my playing,” Wright says. “My first album [“Moanin'”], had the soul-jazz thing, which was a stretch for me. So what I did on this one, to stretch, was to write all the tunes, and I started singing. It seems like I always need a challenge.”

Wright wasn’t a stranger to songwriting. She had written some of the material for her all-instrumental first album.

“As an improvisationalist, I’m making up melodies all the time, in my solos. So writing some instrumentals wasn’t too bad. But working with my own lyrics, you tend to write about what you have experienced. So when you’re singing them, you’re revisiting emotional spaces. In some cases that can be painful, when you’re singing about loss. And that, I hadn’t anticipated. So, I was like, ‘My next album is going to be all happy cover tunes, OK?;” Wright says, laughing.

Of her very pleasing singing voice, Wright says, “It’s always a work in progress, but I continue to get a lot of good encouragement. There are people who, what they do, is singing. I don’t think I’ll ever become one of those people — an Irma Thomas or an Etta James. But to deliver something that works for a live audience is my goal, rather than do instrumentals all night. People like to be sung to.

“One of the bandleaders I work with, Macy Blackman, really started giving me opportunities to sing and stretch myself as a vocalist. I’m pretty fearless. I’ll try anything. I sometimes wonder about somebody’s good sense,” she says with a laugh, “but I’m always willing to try. I’m really grateful to Macy, for giving me that chance, which has led to getting good feedback from people. I thought this is probably a path I should move on down some more.”

Following her CD release show at San Francisco’s Biscuit and Blues on Sunday with her Rhythm and Roots Band (featuring Anthony Paule, guitar; Paul Revelli, drums; Paul Olguin, bass; and Tony Lufrano, keyboards), she’ll be playing alongside Macy Blackman and The Mighty Fines on Tuesday. Wright will also be heard on Blackman’s new swing album, “Frisking The Whiskers,” due in April.

‘SHE ALWAYS COMES TO PLAY’

Blackman says of Wright, “What impresses me most about her is how she always comes to play. Her music comes in three levels: best, even better, and we can’t even talk about it. Nancy and I both have the same attitude toward the audience — if they like it, we like it. And the better we play it, the better they’ll like it.”

Wright’s saxophone history can be both a benefit and impediment to her singing. “I always loved the vocalists who sing like horn players. Sarah Vaughan is somebody like that. And I’m probably going to be one, because I’m a horn player. You already have an idea of the importance of the diaphragm. But to sing, to produce good tone, it’s very different from playing the sax. I’m still having to sort that out and make those shifts, when I go from singing to playing.”

Originally from Dayton, Ohio, Wright was a classically trained bassoon player, majoring in music at university. The theater department invited her to play the saxophone player in a production of “Cabaret.” Picking up the sax, Wright, who had also played piano, violin, concert harp and flute, had finally found her true instrument.

Wright can really make the tenor sax sing. “I began to express myself in the blues. And there’s something very cathartic about ripping a good blues solo,” she says, laughing, “listening to what’s going on around me musically, on stage, and letting that inspire me.”

Wright toured with John Lee Hooker. The new album contains her tribute to him, the song, “Boogie For JL.”

“It was an amazing experience. I was so young and so green, and to go out with somebody of that caliber was so important to my development musically. We did shows with a lot of other bands, on some of the high profile tours. Robert Cray was an opening act. Willie Dixon was on the show. I was like a kid in the candy store going to the gig early and watching everybody else play. And then just to get to play John’s music with John — I can remember moments on stage of such depth and intensity. And off stage, he was this very sweet, dear man.”

Guitarist Tim Kaihatsu, who toured with Cray and often jammed with Wright as part of the Rat Band at Larry Blake’s, became another of her mentors. He would always urge her to take her solos another step further. He died last April, and Wright dedicated the new album to him.

“Putting Down Roots,” her second CD, is another bold step forward for Wright. “It’s an album that represents so many more aspects of my sax playing that don’t necessarily show up on my first CD. It was also exploration. When I made the decision to write all the tunes, to come up with all these songs, it was like, ‘OK, let me open up this box that is me and find out what’s in there and find out if this is even going to work.’ Because I didn’t know. It was like, ‘I’ll try to do this and, if it doesn’t work, I’ll do covers.’ And ‘I’ll try to do my own vocals. If it doesn’t work, I’ll hire a vocalist.’ So it was about testing my limits. And it’s been a very pleasant surprise.”

Wright enjoys the roles of both bandleader and sideperson. She says, “I’m always playing with such fabulous musicians. The Bay Area is so rich and so blessed with the level of musicianship we have here. I’m always looking to up my bar, whatever the musical situation, trying to grow in new areas.

“To me, it’s about the communication between the musicians on stage and if that’s not happening, I’m not in my happy place,” she says, laughing. “And the next thing, which puts icing on the cake, is if the circle of love is completed by us putting the energy out to the audience and the audience giving it back to us.”